Creation of Pakistan in 1947 to satisfy the power hunger of a gang of Muslim separatists led by Mohammad Ali Jinnah became a curse for the erstwhile princely State of Jammu & Kashmir. The greed of the Islamic separatists amplified as they got their ‘Pakistan’ territory drawn by the Radcliffe partition Line. Jinnah started behaving like a stone-age tribal lord and invaded Kashmir along with some regional tribal leaders and managed to grab a part of its territory. Of course, Nehru’s folly should get bigger credit than his guile. Then the shameful defeat and loss of East Pakistan in 1971 turned the ‘Kashmir Issue’ into a pathological national fixation. Now Pakistan’s sole motto became “… if I can’t get Kashmir ‘in the name of Islam’, I will destroy it ‘in the name of Islam” by promoting radicalization and terrorism !! Having lost the capacity to take on India through military means, 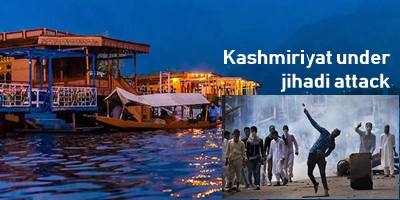 the Islamic State decided to wage a sustained low cost proxy war through jihadi terrorists in the 1980s. It was Pakistan’s silly way to try to win the lost Bangladesh battle in Kashmir! … and it is still going on!!

India-Hate is the only glue that Unites Pakistanis

Born purely out of Hindu-Hatred of a group Muslims separatists of colonial India — and with no positive vision for the future — hostility towards India became the only national goal of Pakistan. This hate also serves to keep the jihadi nation united in one piece, though ethnic fissures are now staring ominously.

Pakistan is the only country in the world that was created ‘in the name of Islam’ by Muslim separatists of colonial India who did not want to live peacefully with Hindus.  To keep them happy the Radcliffe partition line was drawn by dividing the Bengal and Punjab provinces of the British India to mark the territory of the Islamic State of Pakistan, as two disjointed land pieces separated by India. But Jinnah’s bogus two-nation-theory on which Pakistan was founded got exposed within a quarter century! In 1971 its flirtation with electoral democracy proved disastrous — it threw the Islamic State into a civil war leading to mass scale rape and genocide. Ultimately,  the ‘inferior’ East Pakistani Bengalis broke away to become sovereign Bangladesh.

After the humiliating defeat — imagine surrender of 93,000 Pak troops before Indian army along with the loss of a vast chunk of territory — and country’s break up, the Pakistani hatred against India turned into a pathological insanity. One of the villains responsible for country’s truncation, Zulfikar Ali Bhutto —  rather than feeling shame at how he denied democracy to people of East Pakistan, swore to wage a “1000 year war” with India, as if India forced it into electoral honeymoon! But karmic justice prevailed very soon! Dictator Zia ul Haq hanged him in 1978. He, however, reshaped the Bhutto doctrine into the “1000 cuts to bleed India” policy. His idea was to wage a proxy war against India using low cost and fully disposable jihadis created in the Jihadi terror camps. Thus, Pak sponsored violence and terrorism started destroying the peace and serenity of the Kashmir Valley from late 1980s. This abnormal idea became an integral part of its undeclared State policy — and it also steadily turned Pakistan into a paradise of jihadi terrorists, a Terroristan! Today, Pakistan is the global capital of jihadi terrorism — and Pakistanis, while claiming to be victims of terrorism, are proud of their achievement! They think they served the cause of Islam!!

Since the beginning of proxy war in Kashmir, over 42,000 innocent lives have been lost in Jammu and Kashmir. Hindus were forced to leave the Kashmir Valley and all symbols of Kashmiri culture came under terror attack of brainwashed jihadi humanoids.

As per the typical habit in the Islamic societies whatever Pakistan does, it does it “in the name of Islam”. The names, Lashkar-e-Toiba and Jaish-e-Mohammad, are enough to reveal its Islamic intentions in J&K — bloody Islamic Jihad. In the Pakistan occupied Kashmir (POK), the military/ISI runs more than a dozen terror training camps to turn local Kashmiris into suicidal jihadi terrorists and infiltrates them across LoC for dying and killing innocent people, in the glory of Allah and Islam. The ISI runs an elaborate network and hawala racket to fund the social disruption in the Kashmir Valley. Pak uses this jihadi violence for the global propaganda of ‘Muslim persecution‘ by Hindu India — the standard time tested 1400 year old victim-hood Islamic logic.

But the world is smarter today — even the Islamic world!! The Pak military, ISI and political leadership don’t understand why the OIC Islamic group or the Saudis or UAE give no importance to Pak’s pathological obsession with “Kashmir jihad.” They see no point in spoiling relationship with a humane ancient Hindu civilization merely to pamper a rogue and self-destructive Islamic State that promotes violence and terror in the name of Islam. They even have no difficulty honoring the Indian Prime Minister with their highest awards for his Statesmanship or inviting Indian foreign minister as a special guest to the OIC meet, ignoring Pakistan’s infantile ranting.

The Culture of Kashmir is “Kashmiriyat” — Not Islam!

The Identity of Kashmir is not Islam — it is Kashmiriyat! People of Kashmir, even Muslims, think differently. They have nothing in common with abnormal Wahhabi ideology of violence and terror and Muslim kids in Kashmir don’t grow up aspiring to wear suicide vests and become jihadi terrorist.  They grow up like normal humans and subscribe to their own local culture that defines their Kashmiri identity – their Kashmiriyat. This peaceful culture evolved over centuries, shaped by an amalgamation of the wisdom of Hindu Sages that also influenced Muslims Sufis who started arriving in the 14th century – many of them came to avoid persecution in their own “Muslim” societies!!  Sufis appear to be true practitioners of “spiritual” Islam – the “essence” of Prophet’s teachings. They also lead a life of renunciation just like the Hindu sages and yogis.

Anyone with some understanding of ancient India knows that the Himalayan mountains, that also includes Kashmir, have been the abode of seekers, ascetics, monks, Rishis and Munis since the most ancient time. Therefore, normal human beings with spiritual inclination from all over the world find this region highly serene and worth reverence, irrespective of their faith labels.  Locally, even after Islamic invasions, for hundreds of years, both Hindus and Muslims have been seeking solace at numerous shrines, not just in Kashmir but across whole geographical India including Pakistan. Non fanatic Mughal kings saw them as benefactors of humanity, even respected their human worth and protected them. 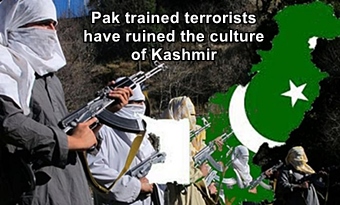 Quite naturally, adherents of violent jihadi Islam — who misinterpret their religion purely for power and dominance — can’t tolerate Sufis and their shrines. The success of Pakistan’s “Jihadi” agenda in Kashmir crucially depended upon destroying all symbols of Hindu-Muslim harmony (means Kashmiriyat).  Thus, Pak sponsored Jehadis targeted all symbols of peace, harmony and humanity in Kashmir. They targeted the annual Urs celebrations at various Sufi shrines – for example, in Batmol and Aishmuqam – which attract people of all faith, and tried to destroy the Shrines – for example, at Baba Rishi near Tangmarg. Simultaneously, Pakistan supported Wahhabi Maulanas started radicalizing Kashmiri Muslims for jihad against India.

In October 1993, a group of terrorists seized the Hazratbal shrine which houses a hair of the Prophet — considered highly pious by all sane and normal Muslims. Two years later, in 1995 Hizbul Muzahideen terrorists seized the famous Chrar-e-Sharif shrine and then burn it down. They also tried to burn down the 700 year old shrine of Baba Naqashband Sahib in Srinagar. In 2012, several shrines were burnt in “mysterious fires”; the most dominant was the Dastageer Sahib in Srinagar. The distorted brained jihadi proudly publicized these criminal acts as the “divine acts of God.”

They also discovered targets in Pakistan. The Pak Taliban, which has been busy targeting the Shias and other minorities, turned its attention on Sufi shrines in Pakistan. They did not spare even the Data Darbar in Lahore and the shrine of Abdullah Shah Ghazi, the patron saint of Karachi. Both attacks invited widespread condemnation by human societies.

What has been going on in the ancient spiritual and pious land of sage Kashyap and Shankaracharya is clearly a case of a 1400 year old barbaric ideology killing humanity. And worse — it is all State sponsored by Pakistan, born in the name of Islam — so called Religion of Peace! It is no consolation that the entire terror drama is limited to a 150×45 km patch in the Kashmir Valley, which is just a tiny fraction of the whole J&K State territory. This area has even seen ethnic cleansing of Hindu population in 1990 while the self-serving (largely Muslim) politicians looked the other way.

If focus is kept on this terror infected area then the evolution of the region can be summarized as below:

What was Kashmir without Muslims?  It was a peaceful holy abode nurtured by spiritual Hindu saints and Rishis. It was a land of spiritual liberation and bliss – Heaven on earth!

What was Kashmir with Hindus and Muslims? It was a peaceful land of Sufi-Rishi culture, a superb mix of Hindu and Islamic spirituality – called Kashmiriyat. It was a land of eternal peace and harmony.

What is Kashmir without Hindus? It is a den of dreaded Islamic terrorists who terrorize and kill humanity every day. It is a land of death, fear, violence and brutality – Hell on earth!

But Kashmir is not the only casualty of Pakistan’s birth in 1947, Balochistan is another glaring example of how Pakistan and its murderous ideology destroys societies. This video narrates the plight of ill fated Baloch people:

You may like to find out why behaves so abnormally: Pakistan: The “Middle East” of South Asia

I am a firm believer in healthy people (mind and body both), healthy societies and healthy environment. Please feel free to comment, share and broadcast your views -- I like rational and intellectual discussions. Thanks for stopping by. Have a Good Day!
View all posts by Goodpal →
This entry was posted in Pakistan, Terrorism and tagged Islamic extremism, Kashmir, Kashmir Issue, Kashmiri Sufism. Bookmark the permalink.