Pak policy of “thousand year war with India” is an acknowledgement of the fact that it can’t win any conventional war with India, nor can it drop any Nuke on its “eternal foe” for obvious reasons. So, the only way to hurt the much bigger India is to continue pricking it with disposable suicidal jihadis brainwashed to see divinity in dying. No law of civilized society or international convention apply on them and offer perfect deniability. 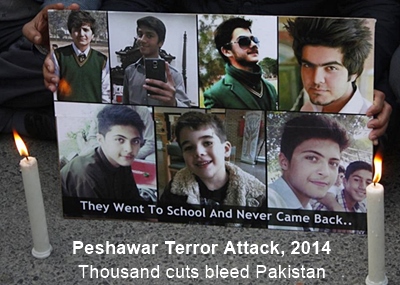 About fifty years ago, after the devastating Bangladesh war in 1971, Mr Zulfikar Ali Bhutto vowed to wage “a thousand year war” against India.

Therefore, Pak hostilities would go on for another 950 years, unless Pak changes its mind!

The “thousand year war” threat acknowledged the simple fact that Pakistan lost the capability to win a conventional military battle with India. Nor can it drop even a single nuke on India from its overgrown pile, for the obvious reason of total decimation after Indian retaliation. Therefore, winning a war with India is out of question – in fact, even trying to win is futile. Pakistan knows it well.

Yet, the war must go on against the “eternal enemy” – the Kafir enemy state that has as many Muslims as its entire population. The jihadi mind of Pak rulers can’t live in peace without war! And futility is not sufficient reason for respecting the ceasefire line!

After the 2008 Mumbai terror attack that killed 166 innocent people, Pakistanis went ecstatic with divine rapture.  But after the Peshawar terror attack on a school that saw slaughtering of 132 innocent kids, Pakistan went in mourning. Perhaps Islam doesn’t teaches the karmic Law of Reaction.

The mono directional Pak foreign policy is strictly India-centric. For rest of the world, Pakistan has no foreign policy; it only has relations, primarily master-slave type. Thus, Pakistan slaves three masters – the US, China and Saudi Arabia. Pak dances to the tune of whoever pays – something like a street hooker. As long as the Americans paid, Pakistan willingly fought the cold war and unwillingly their war-on-terror after 9/11. Then the Chinese promised gateway to Heavens via the CPEC – and Pakistanis went ecstatic to become China’s ‘all weather’ friend! A lot of wiser and ‘thinking’ Pakistanis are alarmed at the prospect of Pak becoming a Chinese colony in the coming years.

Trying to win Indian Territory through military offensive is the divine as well as birth right of Pakistan. Pakistanis often lament: It is so frustrating our military has not won even an inch of territory since 1947. If 1965 was futile, 1971 was simply devastating. How could a Jihadi nation lose half the country; it’s terrible, worse than dying. But thank god – sorry, thank Allah – Bangladesh did not rejoin the parent India.

It is utterly frustrating that Pak can no longer launch military attack on India at will as in the golden era before Bangladesh war. Yet, Pakistan has the divine duty to destroy the kafir nation next door!

So, what could be done? 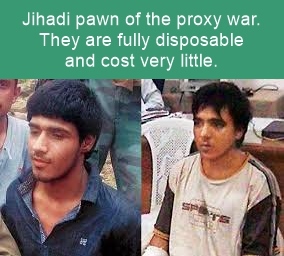 The only solution is a proxy war through jihadis. It’s cost effective, no binding of rules or global conventions on jihadis. They don’t officially exist as they are non state actors, working directly for Allah.  All that’s needed is madarsas for brainwashing and training camps to produce suicidal jihadis trained to see death as gateway to paradise!

Confrontation suits Pakistan better than reconciliation, both internally and internationally. Wise Pakistanis, who see their future in peace with India and other neighbors, are not visible to the ruling circle and are a threat for the Rawalpindi Generals.

The only yardstick of Pakistani patriotism is the level of anti-India hysteria. Bhuttos have been the front runners in this competitive hysteria. To survive in the politics, every politician has to match this hysteria or excel. Politicians come and go but the hysteria stays; it’s meant to be eternal.

The Bomb made a General Lunatic! 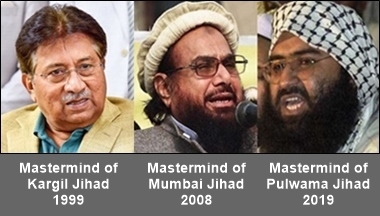 No difference between a General and a Terrorist

General Musharraf thought he could beat everyone in anti-India madness. So, the moment Pak exploded its nuclear cracker in May 1998, just days after India did the Pokharan, he got down to plan ‘Kargil’. Rather than inches or yards, the General aimed for miles – in fact, full Laddakh eventually! His ambitions shored high as if the Bomb charged him with nuclear energy!

But his calculations failed miserably. Neither India remained a passive dove nor did Americans come to bailout its juvenile client. The General, even in his wildest dreams, could never imagine Israel coming to defend India.

When India recovered all its territory by end of July 1999 it discovered stockpiles of ammunition and food supplies – and bodies of over 200 dead Pak soldiers, abandoned to claim lower casualties! Their badges under the jihadi costumes identified which unit they belonged to. Pak stood totally exposed internationally as intruder – with absolutely no rational justification. Disguising soldiers as jihadis did not work as the Indian media flashed their ranks and affiliations; it was forced to admit that they were Pak soldiers, not jihadis. It was a severe loss of credibility for the Islamic nation.

Kargil brought the US closer to India 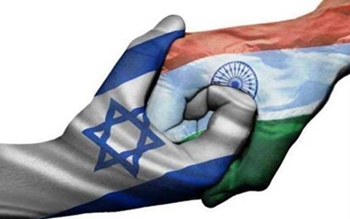 Israel yet again stood behind India, like in previous wars.

Soon 9/11 happened. For the first time, Americans realize the terrible pain of being attacked by terrorists. Next ten years of ‘war on terror’ proved further eye opener for them. Discovery of Osama on Pak soil completely ruined Pak credibility in the global community and Americans were forced to rethink their future engagement with Pakistan.

Prior to Osama killing, the Mumbai terror attack in 2008 has yet again exposed Pakistan as a terror sponsoring state. David Headley’s interrogation revealed the fact that the ISI gave at least Rs 25 lakh to fund the 26/11 Mumbai terrorist attack. Of course, the mastermind, Hafiz Saeed, roams freely across Pakistan sending ominous jihadi threat to Hindus, Christians and Jews of the world. If not Pakistan where else can he be so free, so vocal!

Yet, for now, for the US the biggest sponsor of terror is Iran, not Pakistan!

I am a firm believer in healthy people (mind and body both), healthy societies and healthy environment. Please feel free to comment, share and broadcast your views -- I like rational and intellectual discussions. Thanks for stopping by. Have a Good Day!
View all posts by Goodpal →
This entry was posted in Pakistan, Terrorism, World Politics and tagged Cross border terrorism, Indo Pak Tension, Jihadi groups in Pakistan, Kargil intrusion, Pak Jihadi against India, Pakistan Atom Bomb, proxy war through jihadis, State sponsored Terrorism, Terror groups in Pakistan. Bookmark the permalink.