Kargil Intrusion – How Atom Bomb Made A General Fanatic

Kargil intrusion yet again reflected the typical Pak trait: preference for conflict over peace. It is hard to believe that while the Pak prime minister was busy preparing for permanent peace treaty with India and readying to welcome Indian PM Bajpai on his historic bus trip to Pakistan, a cartel of Pak military generals led by the top brass was drawing elaborate plans to sabotage it. Shabbily planned and shoddily executed, the Kargil misadventure backfired just like its most idiotic 1971 war game plan. 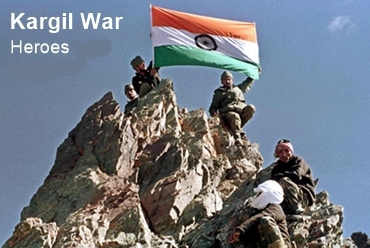 After the humiliating loss in the 1971 Bangladesh war, Pak leadership believed that there is only one thing that could restore Pak dignity — the Atom Bomb!

Mr Zulfikar Ali Bhutto became the pioneer of nuclear nationalism. He shamelessly declared – after losing half the country to Bangladesh and surrender of 93000 troops before Indian army – that Pakistan would fight India for a thousand years, and that it would make the Atom Bomb even if Pakistanis had to eat grass! This is the typical Jihadi fanatic mindset that gets self-destructive in defeat – a trait that the Western powers exploit superbly dealing with the Islamic societies.

Bhutto successfully hide behind Islamic vengeance to camouflage the fact that he himself was among the villains whose scorn for people’s democracy triggered the civil war in the East Pakistan that ended in creation of a sovereign Bangladesh. He succeeded in fooling the people yet again that having the Atom Bomb would permanently heal the trauma of country’s bifurcation. So he revived the nuclear program but it couldn’t save him from the karmic result of his dirty brand of politics.

Dictator Gen Zia (whom Bhutto elevated to the top post bypassing several senior generals) dislodged him from power in a 1977 coup and then hanged him! Bhutto died blaming the Americans for his downfall because he had tried making the Bomb!! His emotional rant against the Americans made Pakistanis paranoid and they started seeing ‘American hand’ in everything that delayed public appearance of the Bomb. But the Bomb remained inside the lab under dictator Zia. The military and the scientist community worked quietly, while the Americans typically looked the other way. For them Pakistan’s juvenile obsession with Bomb and its pathological hatred towards India was of lesser consequence compared with the Cold War game in Afghanistan. However, with sneaking help from comrade China, Pak scientists concluded that they have the Bomb and pushed for a nuclear test. But it was an action that would sure infuriate the Americans and that would mean end of dollar doles — the vital means of Pak survival.

Throughout the eighties and nineties, The Bomb craze grew stronger but the monster  remained invisible. But when India tested its Nukes on 11 and 13 May 1998, Pakistan lost all reasons to be secretive — and the fear of losing dollars as well! A fresh wave of scare mongering blew across Pakistan warning ‘the dark consequences’ of not bursting its own nuclear cracker! Bhutto’s daughter, Benazir, was among the most hysteric. It was a period when ‘balance of power’ between India and Pakistan dictated American policy – and Pakistanis loved it. It was also the period when Bill Clinton – Monica Lewinski sexual scandal was making headlines around the world, multiplying newspaper sales.

When The Bomb ultimately saw daylight and exploded on May 28, the Islamic State went ecstatic as if Allah had transformed Pakistan into a heavenly paradise! But the euphoria of ‘paradise bliss’ did not last long and the harsh realities came back staring more ominously.

The international community was quick to place sanctions on both new nuclear states. Bajpai’s team had carefully calculated the probable impact of sanctions and concluded that ‘nothing would seriously go wrong’ for at least six months – given the size and vibrancy of Indian economy. It also saw that international dynamics would soon work against the sanctions. The calculations proved right!

However, in Pakistan the Nawaz Sharif government had to impose a state of emergency, suspending all fundamental rights under what was called a Constitution. The new Nuclear State became fearful of its own people! Collapsing economy and ‘international sanctions’ made Pakistanis realize that the Bomb was too expensive and ominous as well!

Acquiring nuclear status gave a severe twist to the cocky brain of General Pervez Musharraf and his Ghazwa-e-Hind ambitions climbed irrational heights. He planned to intrude deep across the LoC and occupy the snow covered peaks in the Kargil region – where army posts were generally left unoccupied during winter season by both sides. He­ aimed was to cutoff Ladakh from Kashmir – and redraw the Line of Control!

Indian PM Atal Bihari Bajpai undertook a historic bus trip to Pakistan in February 1999 and signed the Lahore Declaration with Nawaz Sharif. It was the time when Musharraf’s troops were sneaking across the LoC, sabotaging the historic peace initiative of his own Prime Minister. Disguised as jihadis Pak soldiers amassed supplies and occupied the vacant Indian posts. The Jihadi disguise was important for deniability. If things went wrong Pak would claim that it was a mujahideen (holy terrorists) venture on their own. But the foolish soldiers carried their diaries and even wrote their activities sitting on enemy peaks. These diaries later provided vital info to the Indian side.

General Musharraf’s calculation was traditional. He assumed that Uncle Sam would ignore the childish land grab mission and after discovering Pak troops sitting in their bunkers Indians would merely make verbal noises and then keep quiet because counter offensive would be a highly risky and costly affair as Pak troops had tremendous height advantage. Further, if military escalation happens the US would, as usual, come to mediate fearing nuclear conflict, and Pak would retain the territorial booty!!.

But as things turned out he was up for an unexpected surprise. Indians come to know of intrusion in early May when a shepherd reported Pak movement. Soon it became clear that a serious breach had taken place at the LoC. Watching the activities of the invaders Indian army concluded that the intruders were not death-seeking jihadi humanoids but regular Pak soldiers. Indian PM Bajpai decided to drive away the enemy at any cost — this foiled rogue general’s calculation.

Given the geographical disadvantage, Indian efforts to regain the posts went on for over two months. They also had to operate with another self imposed handicap — the troops were under clear instructions, to not cross the LoC. This second step proved a great diplomacy; it made open US support to its puppet difficult. It would make Americans look supporting Pak intrusion across the LoC.

Climbing steep hill amidst heavy fire from the top was proving highly fatal. But after heavy initial casualties Indian forces steadily managed to recapture the entire lost territory. Israel offered unconditional and all round cooperation that proved crucial. It supplied vital ammunitions and laser guided missiles that made air attack highly precise. Even Indian navy played a vital role – it circled seas around Karachi and choked movement of essential supplies. There were reports that Pak was left with only six days supplies when it was forced to retreat.

What did the Americans do? The US President refused Pak request for mediation and sternly advised full retreat to original position. Clinton even did not meet Pak PM Nawaz Sharif in the White House. Musharraf’s planning went totally haywire and Pak stood exposed as intruder before the global community. It was Bajpai’s diplomacy and self restraint under which Indian military performed that won international applause.

Indian side had 527 casualties. Musharraf tried to play down Pak casualties by not claiming bodies of over two hundred soldiers but various estimates of Pak casualty ranged from 700 to 3000. Pak public had no inkling of what was going on in Kargil and their men were dying until the Pak media picked up bits from the Indian side. On July 26, 1999 Bajpai declared the Kargil conflict over. But the Pak misadventure taught valuable security lesson to India that never took its border defense seriously since birth of the rogue neighbor in 1947.

The Bomb Proved Worse than Useless!

Pak retreat was catastrophic for its ‘holy jihad’ in Kashmir – it meant plain betrayal. Hundreds of Pak soldiers died for nothing wearing jihadi costume!

The humiliating retreat from Kargil started a blame game between Musharraf and PM Sharif – each afraid of the other and both trying to evade responsibility for the failure.

Then the obvious happened. In October 1999, Gen Musharraf forced military rule on Pakistan declaring – There is despondency and hopelessness surrounding us with no light visible anywhere around…. We have reached a stage where our economy has crumbled, our credibility is lost, state institutions lay demolished.

It was the standard justification for military dictatorship. What he said had been repeated many time earlier in Pakistan, at the onset of every military rule.

Kargil happened and got forgotten in Pakistan. Like the Bangladesh war, Kargil too is something Pak doesn’t want to remember.

But for the rogue Sharia State, the Bomb became an Islamic Bomb – a holy gift directly from the Allah — for jihad for Muslims everywhere against Hindus, against Christians, against Jews, against every kafir in the world. The bomb became more important than even Pakistan!

Pak Generals may not think of another Kargil again, but the jihadis would surely try repeating the Parliament, the Mumbai, the Pathankot, the Uri, and the Pulwama – as long as Pak has the Islamic Bomb! Some day, they would love to blow up themselves with a nuke tied to their belt — perhaps to claim 72000 virgins in the paradise!!

But that would be yet another dark day for the humanity.

I am a firm believer in healthy people (mind and body both), healthy societies and healthy environment. Please feel free to comment, share and broadcast your views -- I like rational and intellectual discussions. Thanks for stopping by. Have a Good Day!
View all posts by Goodpal →
This entry was posted in Pakistan, World Politics and tagged Bajpai Bus Trip to Pakistan, General Musharraf's Betrayal, Kargil intrusion, Lahore Declaration. Bookmark the permalink.